Want to better understand what your Structural Engineer is saying?

The following structural engineering terms and figures are described in order to give the average person more of an understanding of the mathematical engineering jargon used by Vitruvius engineers. After reading this, you will be able to keep up in an engineering meeting or even out do your friends at a Friday night gathering. However, if you are friends with other engineers we refer you to professional engineering journals and resources to learn more about each term. 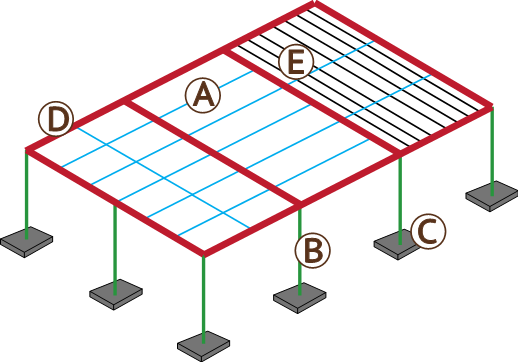 One of the most common structural members, this is a structural component that carries load to other horizontal components called girders. Beams, girders, joists, and headers all work together to transfer loads from floor and roof systems into columns. See the blue members labeled “A” in Figure 1 above.

A beam-column is a member which carries load in both bending, like a beam, and tension/compression, like a column.

This is the vertical member that transfers loads in compression from other framing members into the foundation. See the green members labeled “B” in Figure 1 above.

A footing is a concrete rectangle at the base of a column or wall, this is the final step in the load path, transferring vertical loads into the ground. See the gray rectangular blocks labeled “C” in Figure 1 above.

A foundation is a concrete element used to support the structure and transfer all the loads into the ground.

A gable is the term used when a roof slopes down only 2 sides then has a front or back that is higher than the sloped roof. 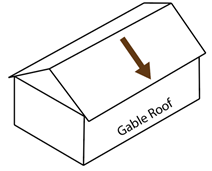 A girder is a horizontal member which directly loads into main supports and connects beams and floor systems to the vertical supports. See the thicker red members labeled “D” in Figure 1 above.

A type of engineered lumber that allows for larger size beams, girders, and columns while using smaller trees. Glulam stands for Glued-Laminated Timber.

This can refer to two things: for common construction work, it refers the ground elevation. However, for structural engineering specifics it may be refereeing to the material grade. The material grade is most commonly used for steel members, such as A992 or A36.

A structural member that is placed over a wall opening, to carry loads across the opening. An example of a header is a short LVL beam over an extra large doorway.

A roof that slopes downward on all sides of the building. These are used more in snowy or high wind areas. 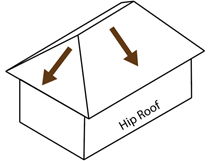 A joist is a member, similar to a beam but instead of one solid member, joists are multiple pieces joined together to create a lighter alternative to a beam. Joist can be open-web or wood “I” shapes created from engineered lumber. Joists are designed as simply supported beams. See the thin black closely spaced members labeled “E” in Figure 1 above.

The amount of angle the member or roof system has relative to horizontal. The pitch is most commonly used to describe the slope of a roof system.

A concrete floor or roof system, typically these range from 3-8 inches in thickness.

Steel shapes and grades that are used in building construction.

A strut is part of a brace that is used to resist tension and compression forces.

A stud is a 2x dimensional lumber or cold-formed steel used vertically for wall framing. Studs are spaced anywhere from 16 inches on center to 24 inches on center. At the ends of walls sometimes studs are doubled up and can be called a “King Stud”.

Was this article helpful?

Thank you for your feedback

Sorry! We couldn't be helpful

Thank you for your feedback

We appreciate your effort and will try to fix the article

Articles in this folder -